Sangeang Api is an active complex volcano on the island of Sangeang in Indonesia.
It consists of two volcanic cones, 1,949 metres Doro Api (active) and 1,795 m Doro Mantoi (dormant).
Sangeang Api is one of the most active volcanoes in the Lesser Sunda Islands.  Since a major eruption in 1988 the island has been evacuated. The most recent major eruptions occurred during December 2012 and May 2014.  Currently the volcano is having near-continuous small eruptions and slow, short lava flows that can be observed on this tour from the saddle between both peaks at about 1500 metres altitude.
Elevation: 1,949 m
Last major eruption: May 30, 2014 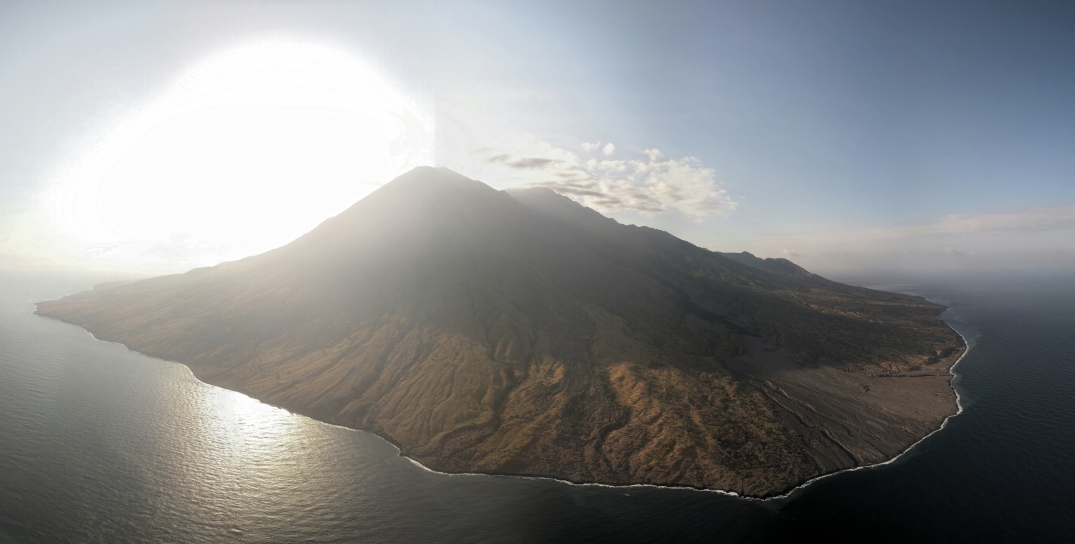 Day 1
● Pick-up by car or minibus from Bima airport on flight arrival.
● Drive to Sangiang Village – around 3-4 hours including lunch and logistics stops in Bima (both included).
● We arrive at Sangiang Village beach and wait for the boat to Sangeang Api island. Exact timing varies, so we may spend some time relaxing by the ocean side and watching activity in the harbour and our first glimpse of Sangeang Api island in the distance.
● Boat ride to Sangeang Api island. Entry into the boat is by wading through up to knee-deep water and climbing onto the boat. Luggage will be carried into the boat dry by our porters and covered by a tarp inside the boat to protect against any occasional splashes of water depending on wave conditions. The boat ride is around 2 hours.
● Arrival at Sangeang Island beach before dark. Exit from the boat onto the beach is again by wading through shallow water.
● Dinner with the guides and porters on the beach.
● We settle in for an early night to start fresh the next morning. Sleeping will be either in our tents near the beach or, if unoccupied, in one of the temporary bamboo farmers huts by the beach.
● An alternative if judged appropriate by our guides is to walk around 1 hour into the plains inland and camp there for a head-start on the climb the next morning. 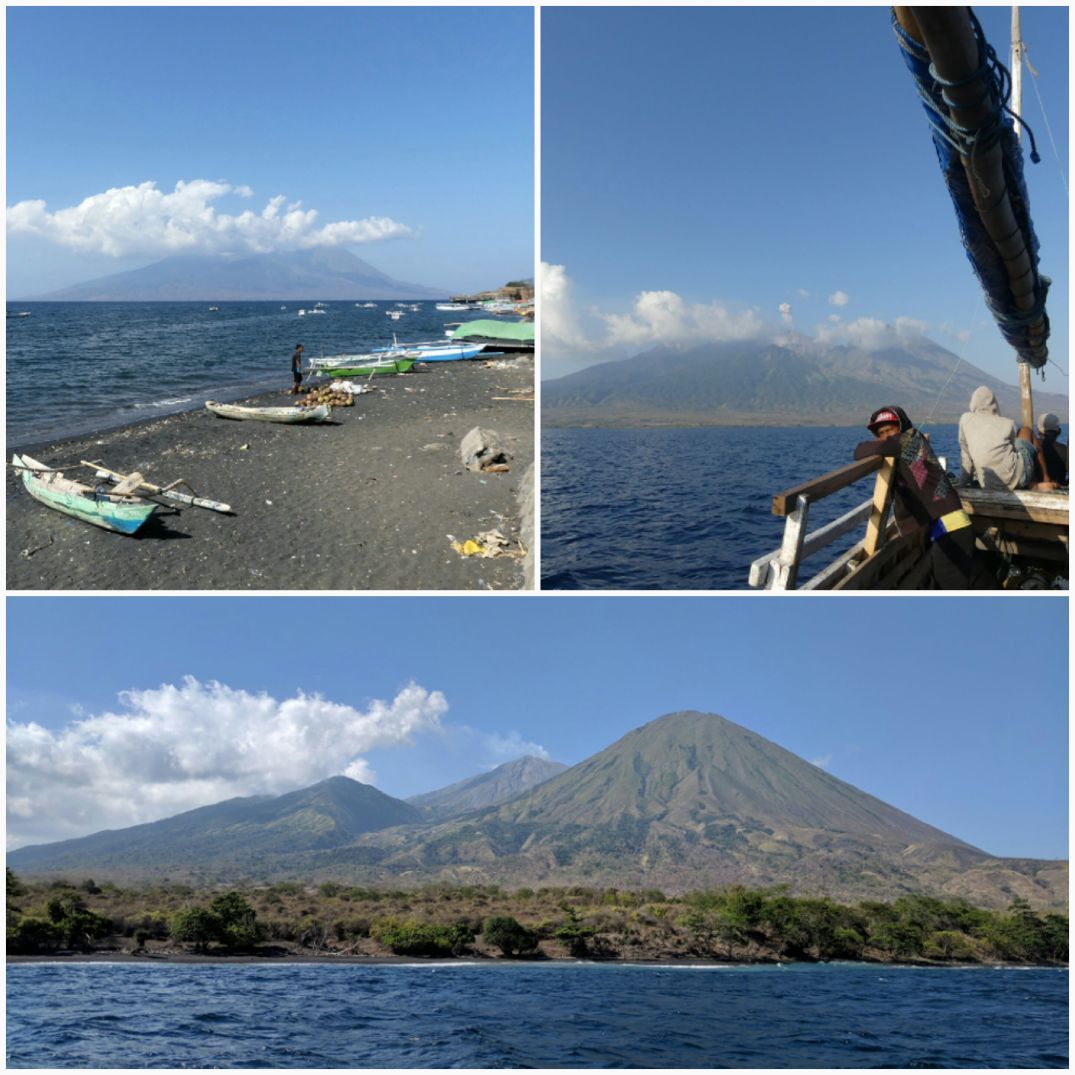 Day 2
● After an early breakfast, we leave soon after first light for the hike up the mountain.
● We travel with a crew of porters who will take water and food up the mountain for us and descend again the same evening as there is no water source on the mountain.
● Depending on pace and number of photo stops along the way, we arrive at the saddle between both peaks mid- to late-afternoon, in time to pitch our tents before sunset and ready to enjoy the volcanic show during twilight.
● Overall the hike from the beach to our camping location on the saddle of the mountain usually takes between 8 and 10 hours including snack breaks.
● Night observations of the volcano in the evening and throughout the first half of the night (before clouds usually settle in).
● Porters will descend the same evening, but of course, guides will stay with us on the mountain overnight in their own tent. 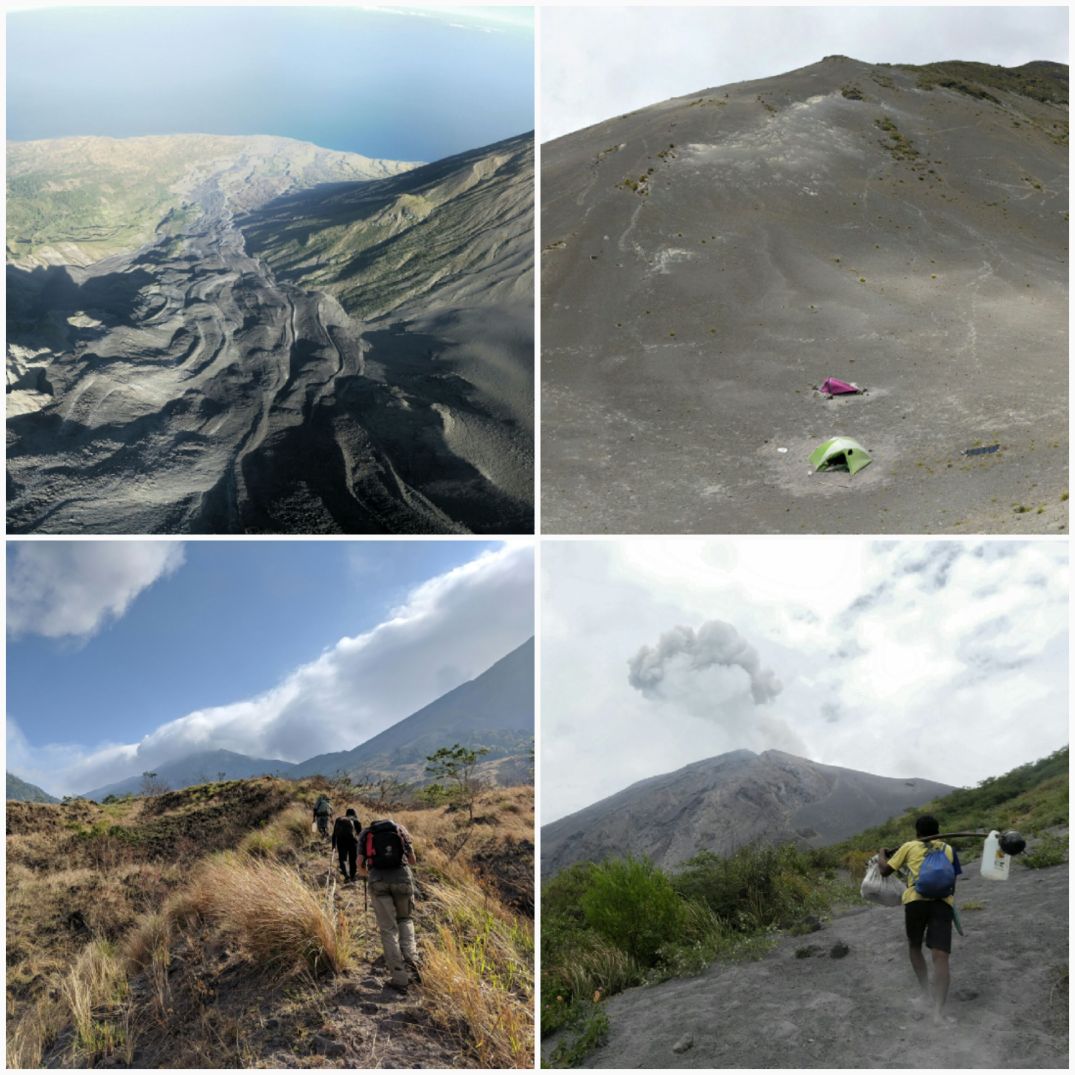 Day 3
● This is a full day to observe the volcano and explore the summit saddle area.
● Weather patterns change regularly, but one common pattern is patchy fog until around mid-day – sleep in in the morning after a night of observations or explore the saddle for some views of the
recent lava flows.
● Another option is a ~1-2 hour climb to the summit of the inactive cone with another great perspective of the active one.
● The lower sections of the recent lava flow fields can often already be seen before the fog has cleared up completely, by moving further east on the saddle and looking down towards the coastline.
● However, while exploring, it is *not safe* to approach the active crater, so we follow the guides’ instructions on where we can and cannot go while exploring the summit saddle area.
● We settle back in or near camp before sunset to be ready to observe the glowing lava ejections during twilight and night again. A common weather pattern is for clouds / fog to close in around midnight, but of course conditions may vary. 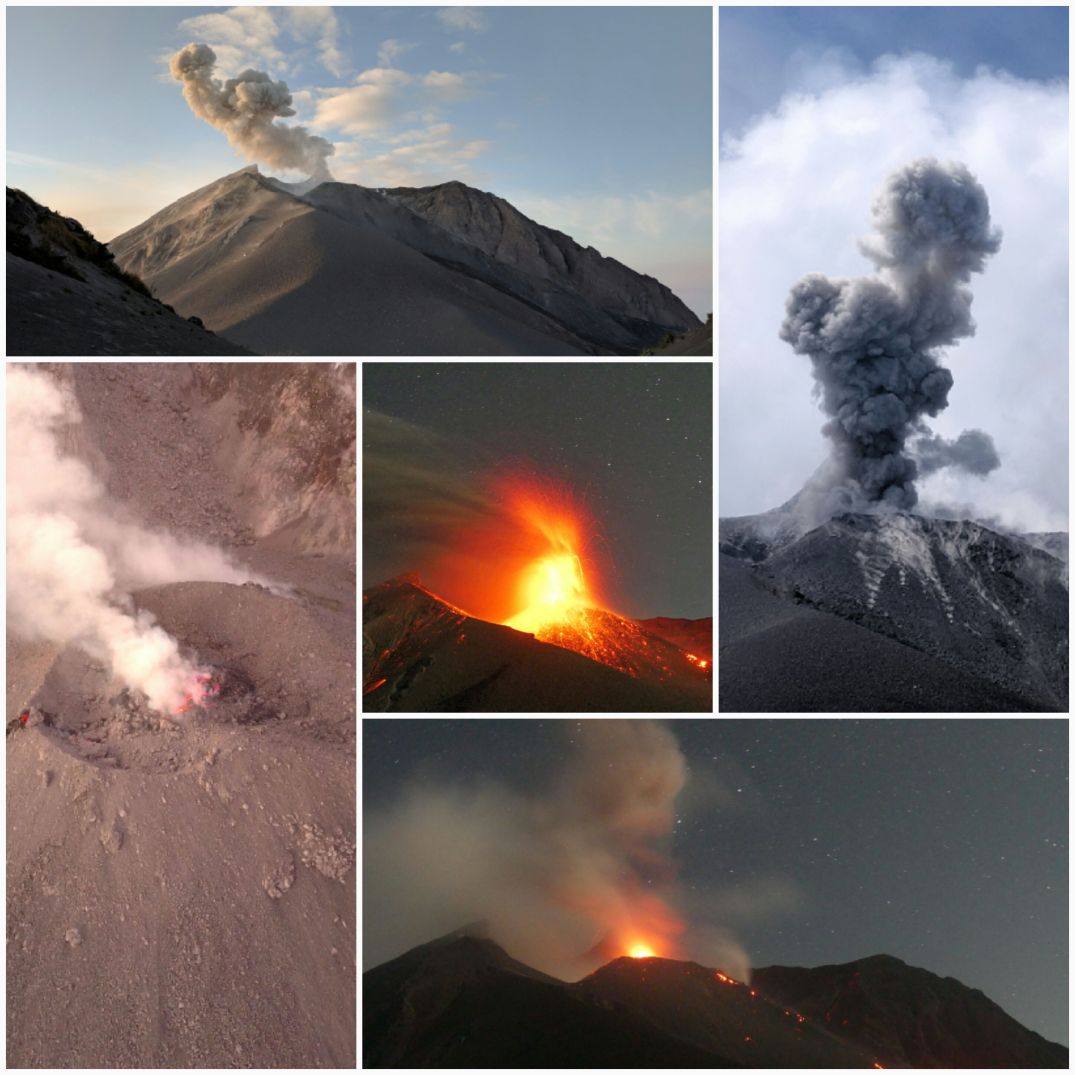 Day 4
● We pack up after breakfast and head down the mountain; depending how early we get moving, we will get to the beach by early afternoon.

● Time, boat availability timing, and sea conditions permitting, we may be able to take the boat around to the SE side of the island in the afternoon to observe the 2014 eruption pyroclastic flow deposits from the sea.
● We return to the village on mainland Sumbawa no later than shortly after dark (usually much sooner).
● Depending on group size:
○ Small groups up to 4 guests: We have dinner and spend the night at the guide’s house with basic accommodations (sleeping bag on the floor).
○ Larger groups with more than 4 guests: We drive ~2 hours to Bima, have dinner at an ordinary restaurant there, then spend the night at a hotel in town.

Day 5
● After a good night of rest, we drive to Bima airport for your return or onward travel.
○ Alternative option for drop-off at Sape harbour for public ferry to Labuhan Bajo, Flores (e.g. for Komodo tours etc.)
● Option to either sleep in or leave early in the morning for time to stop by the basic museum on the history of the Bima area and its various sultans in Bima city (in case of Bima airport drop-off only).

INCLUSIONS
● All services referred to in the itinerary below
● All transport from and to Bima airport / Sape harbour (car, boat)
● Guides and porters for food, water, camping equipment, light luggage per guest
● All basic meals and snacks between Bima airport pick-up and drop-off

EXCLUSIONS
● Transport to and from Bima before commencing and after concluding this trip; any air travel
● Any additional food or drink wishes beyond basic offered meals and water
● Any side trips not listed in the itinerary
● Anything not explicitly included

For reservation or further information don’t hesitate to contact us: