Indonesia, a sprawling archipelago of 17,500 islands, is a nation adrift in the ocean. But the land has an equally strong —if not stronger— impact on Indonesia’s population. Sitting atop colliding plate boundaries, the country has been wracked by frequent earthquakes and volcanic eruptions. 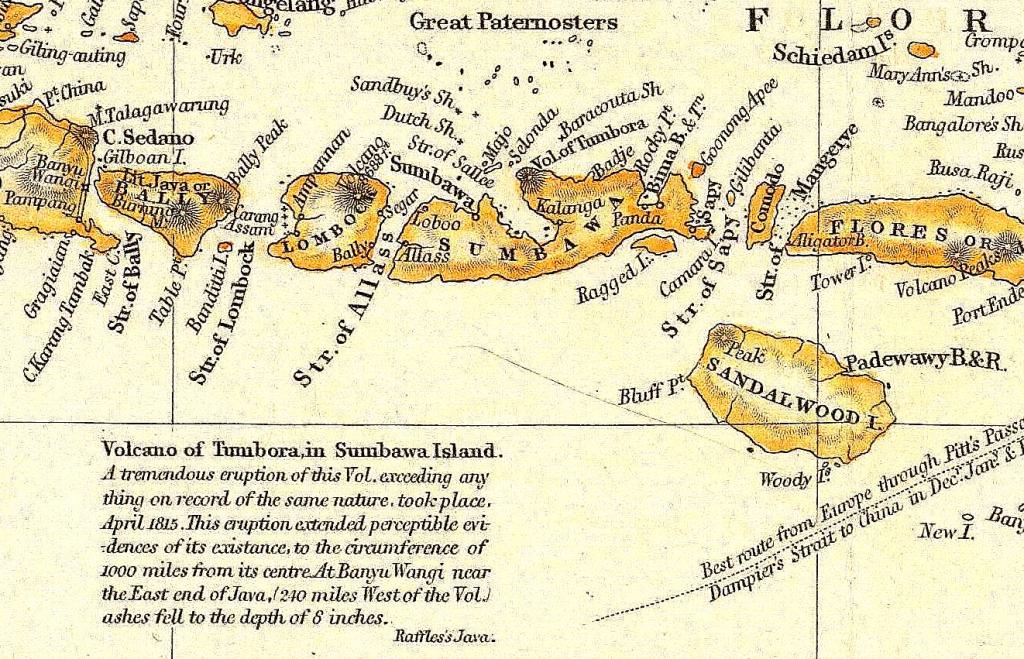 Sumbawa is the largest island in the West Nusa Tenggara province, at 15.400 km2, roughly the same size as Switzerland. From east to west the island stretches 280 km’s, while the distance from north to south varies from 15 to 90 km’s. The island’s population is around 1.000.000, 3 times less than neighboring Lombok, which is also 3 times smaller than Sumbawa. The entire island is characterized by a steep and rugged topography, dry rolling hills, deep valley gorges and the 2350mtr Tambora volcano as its centerpiece. Sumbawa is predominantly volcanic with a limited extent of uplifted limestone in some coastal areas. Sumbawa has a total of 56 islands, of which a dozen are inhabited; the largest is Moyo Island which is also made up entirely of limestone.

THE BIGGEST ERUPTION IN HISTORY

Sumbawa is a part of one of the most tectonically active regions in the world. In 1815, the dramatic explosion of the Tambora volcano found its way in the Guinness Book of Records as the biggest volcanic eruption in modern history. Its eruption was a catastrophe without equal in recorded history.

Before the eruption Mt. Tambora was a volcanic cone more than 4,000 meters high and 60 kilometers in diameter at sea level, densely blanketed in forest. The volcano had never erupted or been active before in living memory. Although the top of the mountain collapsed in 1815, what still stands today is unusual and provocative in its features.
The eruption of Mt. Tambora occurred quite unexpectedly. The consequences of this natural disaster were catastrophic and far-reaching, not only for the subsequent history of the Indonesian archipelago, but also for developments in the world at large.

Although almost everyone has heard of the eruption of Mt. Krakatau in 1883, many people have never heard of the eruption of Mt. Tambora. Yet, in the latter explosion much larger quantities of volcanic material were released and many more people were killed. The consequences of the eruption for Sumbawa were disastrous. There was pumice stone, lava and ash scattered all over the island; the average depth of the layer of ash covering the ground measured 50-60 centimeters, though closer to the volcano it reached more than 3 meters.
The falling pumice and masses of ash destroyed many homes. The kingdoms of Pekat and Tambora were wiped off the face of the earth, with none of their inhabitants, including their rajas (Abdul Gafur of Tambora and Muhamad of Pekat), surviving the cataclysm. Eventually 117,000 people in the region died, most of them from disease.

Neighboring Islands: The consequences of the volcanic eruption in Sumbawa were not restricted to this particular Island; other islands in the vicinity also experienced the effects. The islands of Bali and Lombok and South Sulawesi were particularly badly hit. Heavy ash falls following the eruption covered the nearby islands with a blanket of ash about 20-30 cm. thick. For a number of people these ash falls were directly fatal. Many were killed immediately, buried under collapsing buildings which caved in under the weight of the huge quantities of ash. The great majority, however, lost their lives as a result of the destruction of the crop. A serious famine in Bali and Lombok resulted soon after the eruption. This plunged the islands into an abyss of poverty and misery.

The consequences of the eruption were starkly evident in the area around Mt. Tambora and its neighboring islands but they were not confined there, for debris and/or chemicals shot up into the atmosphere affected the weather of the whole world, particularly Europe and North America. The summer of the year following 1815 was unusually rainy and cold; in fact, 1816 came to be known as the “year without a summer”. Although at the time no one suspected any connection with the volcanic eruption of the previous year, today this connection is widely recognized.
The summer of 1816 was exceptionally cold—an average of 1 to 2.5 degrees lower than normal—especially in the northeastern parts of the United States, in Canada and in Western Europe. The minimum daily temperatures in the northern hemisphere were extremely low. People around the globe suffered from malnutrition and many died from starvation. The exact numbers are not known.

THE KINGDOM OF TAMBORA

By about 1800 human settlements were established throughout the island of Sumbawa, all belonging to one or another of the six petty princedoms or sultanates existing here at the time: namely Sumbawa, Bima, Dompo, Sanggar, Pekat, and Tambora. These settlements were located mainly near rivers and teak (Tectona grandis) forests.
Before the year 1815 People made a living primarily by growing rice, mung and maize, and by selling coffee, beeswax, pepper, cotton, timber, honey, redwood, sandal wood, incense, red dye, and horses. The area was thought to be highly productive agriculturally.
At the time of the eruption, Tambora may have had up to 10,000 residents and been a small wealthy kingdom. The Tamborese were no easygoing people as can be seen from the wars of succession in this kingdom. They were known as brusque and short-tempered. Resident Tobias estimates, in 1801, that they “are surely the best and bravest nation on this coast”.

Their village was 4 miles inland to protect them from pirates, but its location left them vulnerable to the eruption. An entire kingdom of people was buried there. It may be a bit of hyperbole to speak of a kingdom, but what has been excavated is probably just the first of more villages to come.

The surge to reach Tambora village swept the area in the evening at 7 pm of 11 April 1815, and instantly buried the surrounding areas of the volcano, and killing people within a 7 to 10 km radius from the crater. The first surge swept in to Tambora village at sufficient velocity to topple and to transport building rubble 2 to 4 m. Temperatures in this surge were high enough to carbonize almost everything in its path. Everything at the site had been turned into charcoal by the heat, preserving wood, people and other materials. Victims of the volcano probably died where they stood as superheated ash and sulfurous gas clouds raced ahead of the eruption. Most of the ancient-buildings were constructed by woods and bamboos which were easier to destruct and burn by hot pyroclastic flows and surges.

In the 2004 excavation area, accumulation of pumice deposits had possibly collapsed roofs and the houses had been abandoned and were therefore still inhabited when the surge struck, as evidence by two human skeletons found inside. Continuing excavation has discovered a complete house-building at the depth of 2 to 3 m of pyroclastic flow and surge deposits. The original shapes of the beams, roof materials and bamboo-floors have been identified, but they were completely charred on very high-temperatures. The other materials such as Chinese porcelains, potteries, and copper bowls were also found inside the house area.

In the 2008 excavation area, another house on stilts, destructed by the forces of the eruption and completely carbonized, plus a human skeleton were discovered. This skeleton was found in upward position and there was a dagger (Kris) and a copper tobacco box found tied to his waist, together with a ceremonial spear at his side. In his hand he was holding a number of rings inlayed with precious stones. Around the neck there was a necklace with a large pendulum and a bracelet around his wrist. The pendulum was clearly an attribute of royal full dress.
Not far from the carbonized skeleton there were numerous other artifacts, such as ceramics, bottles and coins. Supported by these finds it is clear that this person did not belong to the class of ordinary people.

In the 2009 excavation area, yet another wooden house (carbonized) was discovered in linear position with the previous areas. Just outside the house a skeleton was found. The victim was clearly struck down by the collapse of the house and forced face down into the pumice and ash that had fallen on the previous day of the great eruption. It’s left hand was underneath the head protecting it from the fall. It’s legs were covered with fallen debris from the building. From the size of the skeleton one can assume it was a male person whom stood 1.85mtrs tall. The collapsed building, a wooden house with grass roof, built on stilts, contained numerous precious artifacts. This again proves that this linear composed row of houses did not belong to the common people but people with a certain status within the Kingdom of Tambora.